This is one artist’s work: one statement, one opinion. Art speaks to the observer, and engages one into an interaction with what the individual brings to the work and what the work represents to him or her.

Our community (local, national, cultural, and racial) continues to struggle, and we face the questions, “Who am I?", ”What do I believe?”, and “Who are we?"  This work offers thoughts to contemplate through visual representation.

Upon first glance, the chess set is literally one-sided.  There is only one set of pieces and half of a board, which significantly limits how far one could progress in playing the game.  When the observer approaches the board from front and center, he or she becomes the player with the white pieces.  As the player, each observer is faced with being both competitors simultaneously.  You see yourself in the face of the opponent.  This incorporates both concepts of true competition is competing with yourself, and to know your opponent is to know yourself.   Are you so different from one you identify as your opponent?

The game of chess is a dance, an interaction, a conversation.  Each movement, each expression is a conscious decision based upon the study (what you know, and what you think you know) of your opponent and an anticipation of your response to the moves he or she will make.  You, through your reflection, is in truth, your greatest competitor and who you, at the end, face with the consequences of the decisions you choose to make.  The skills of looking within yourself and the ability to take on the perspective of another give opportunities for finding commonalities and cohesion, despite disagreeing with some aspects of another.

Communication versus conflict.  There are 2 techniques in effective communication:  reflection and mirroring.  Both are used consciously and unconsciously when engaged in listening to someone.  One involves the mirroring of gestures, expressions, and other forms of body language; while the other incorporates re-stating what the person has said back to them to demonstrate that you have heard them and are actively listening to what they have to say.  Conversation does not take place in the absence of listening, and all too often, conflict is the only message conveyed.

The Pawns and Pieces

Each piece is both white and black, with gradation between the two.  Every individual has contradictions and inconsistencies in beliefs, actions, and perceptions.  The truth lies somewhere in between, as is perception of reality in the mind of the beholder.  The pieces sit on separate mirrors, and look different as well as have different sets of movements or functions.  As powerful as one piece may be, it's strength and value lies in how it can move with, or as part of the set; with a series of strategies and plans of action using the pieces as a whole.  One piece does not single-handedly win a game for the player, and should one choose to exclude any pieces, he or she unwittingly contributes to his or her own deficit.

The platform for the board is the back of a mirror, one of 2 sides that may not often be seen, but remains an essential part of the mirror supporting the smaller pieces.  The square mirrors are parts of the board, but are also individual floating pieces of glass.  They are part of a larger group, a bigger picture, and yet retain their individual space.  The space between the squares is flexible, and may be greater, smaller, angled, or even absent; however, to function as part of the chess-board, they must relate to one another.  As an individual, a community, a society, a people, we are not so 2 dimensional that what is seen in one aspect reflects the whole of who we are.  We have choices and make decisions that impact far more than our individual beings, and to develop into a community that is able to identify as “we”; there is a need for individual and community introspection as well as reflection.

It’s your choice. It’s your move.

IMAGE RE:  IN CHESS 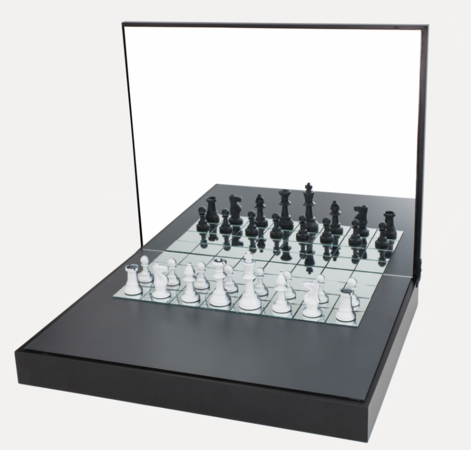